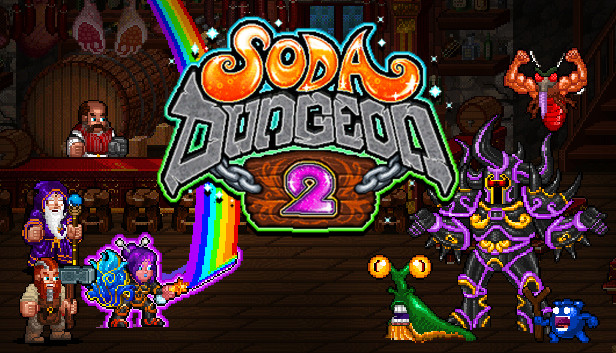 Soda anyone? Well, with this game you can battle monsters AND get your soda fix! Soda Dungeon 2 is a unique game combines turn based RPG with the theme of soda and its so fun. Raid the dark lord’s castle and stop him from destroying the world.

To stop the dark lord you must enter each floor and do battle with different monsters. Win each battle and you will collect money, ore, and equipment to aid you on your quest. You can spend your hard earned money in a couple of different ways. First you will need to hire warriors to raid the castle. To do this you will need to visit the local inn. This is where they gather. At first the inn is completely rundown, and it is your job to buy stools, tables, and beds for it. The more of these you buy the more they will be attracted to the inn.

But how does soda fit into all of this, you ask? Well, by buying different kinds of soda for the inn, different types of warriors will visit giving you a variety of options to choose from when it comes to recruiting them. For example, buying Hammerin’ Ale will attract carpenters, while Quarry Quench will attract miners, and RN Cola will attract nurses, just to name a few. You can also spend your money on construction of different buildings like the blacksmith or wizard’s hut.

When venturing into the dark lord’s castle you’ll encounter turn-based battles with groups of monsters. Defeat them and you’ll ascend to the next floor. Eventually you will encounter a group of monsters who are just too tough, so prepare to be defeated. But you know what? That’s okay.

This game doesn’t penalize you for dying. Nor does the game expect you to win the battles all at once. Plus when you do die you bank the money you collected along the way. Another thing is that every ten floors you will have to fight a boss. If you have unlocked the wizard’s hut you will be able to teleport one floor above the boss level (only if you have defeated it before); Use this to your advantage. Also, any equipment made, found, or bought will automatically be applied to the warriors you hire. You will not lose them if you die.

I am having a really good time playing Soda Dungeon 2. The music can get a little repetitive in the hub area, but it’s not that annoying. One thing that I thought was a little funny was that some warriors will burp when you recruit them (which shows how immature I really am). The graphics are 2D, but nicely detailed, even though you can still notice the pixels. Another thing that I thought was cool is that as you get further in the game you will be able to recruit more warriors at once to do battle. You will eventually have enough of them to surround your enemies and do more damage. Overall this is a great game. You can play it on Android, iOS, and Steam for free. Well, as always, its on to the next…