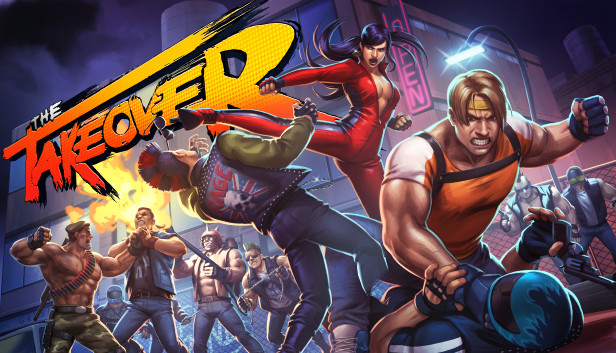 The Takeover isn’t a huge game.
But I do hope it will be remembered in the years to come. Many folk look on yesteryear fondly.
I don’t. While there are great things in the past, it’s never as rosy as it feels in your mind’s eye. No drink ever tasted so good as the pristine memory we hold so dear.
And that’s the bleeding truth of nostalgia. The reality, call it tragedy or truth as you will.

The Takeover doesn’t go for that. And is the only recent Indie game I can think of offhand to go so thoroughly Retro without dipping into Pixel Art. Instead, it sports this very radical look of Pre Rendered characters akin to Mortal Kombat and especially to Killer Instinct. It keeps and cherishes this arcade game feel while being an HD game meant to run on modern systems, with beautiful HD characters animated as if they had those same old memory limitations of twenty some years ago.

The closest comparison I can come to is how Guilty Gear Xrd has captured the 2D hand drawn animated style of Guilty Gear while in reality being a 3D rendered game with phenomenal shaders and animations that deliberately imitate the limitations of traditional animation. It’s a surreal and very beautiful experience that every fighter fan must experience. The Takeover has accomplished similar wizardry here, and I love it.
And I hope you and others pay it the time and attention it deserves from you.

Beyond the visuals, I have to emphasize the quality of the original soundtrack here. It’s amazing, and I want it. It has this Grunge-y Rock sound with the main theme, look up anything even tangentially mentioning this game and you’ll see far more musically literate folk invariably showering the OST in praise.

The Takeover is a Beat Em Up. You wander the streets delivering pain to people that need it. And there are a lot of people in need of it, you are their only hope. Go, deliver righteous beatings.

Sooo how does The Takeover Play? Very well. I’ve been playing the Switch build, and it’s never had any trouble in performance.

On the Switch, the A button performs a Punch, pretty standard.
The X Button performs a Kick, which have a bit more range,
and the Y Button executes a Special Move that drains a little of your Health with each use.
Lastly, the B button Jumps. It is the only one of the four Face buttons that is intuitively placed for me.

After a bit of practice though, these odd Button Mapping choices didn’t interfere with my fun.
The Left Shoulder (L) or Trigger Buttons (ZL) can be held in order to automatically Run, which I love as I often have a little trouble with movement in this type of game.

Players must mix their Punches and Kicks to make some lengthy combos, and the last Punch can be made into one of two alternate finishers by holding Up or Down when executing it.
Holding Up will launch the enemy into the air, and allow you to Punch and Kick them a few extra times before their body hits the floor.
Holding Down will slam the enemy into the ground, very handy for getting them out of your way for a bit so you can move.

Walking close to an enemy will automatically Grab them, at which point you may temporarily Throw, Hit, or Slam them. Pressing X a few times will Hit them, pressing it while aiming Backward will Throw them that way. Pressing A will Slam them, dealing an attack to floor them much like a Downward Finisher. By pressing B to Jump, you can leap around to the other side of your opponent so you can Throw them in the opposite direction.

A Combo Counter will keep count of how many consecutive blows you can dole out without taking Damage or taking too long between hits. Do well enough, and a Rage Meter at the top of the Screen will fill, allowing you to activate Rage Mode. Rage turns the Screen red, boosting your attack power while allowing you to automatically Block all incoming attacks.

Another Meter will fill to allow a Super Attack by pressing Punch and Kick at once. It’s called a Super Attack but it’s really a Screen clearing Air Strike. No reason or justification in the game, it just happens. And you’re totally safe from harm during all the explosions. Because Videogames are weird.

Connor Grayson
Connor isn’t a complicated guy. Actually, at least in terms of moveset he’s incredibly similar to Haggar the wrestling mayor from Final Fight. Which is definitely deliberate considering Final Fight was clearly a source of inspiration for the developers. Running with Connor and pressing Punch will let him grab a nearby enemy and perform a DDT. This along with his ability to perform a German Suplex as his default Slam move makes him my favorite character.

Megan Brookes
She is easily the fastest of the main trio, and wears a bright red Motorcycle Racing Suit.
She’s got the best Combo ability, and her legs go alllllll the way up, which is handy both as eye candy AND a means of whacking enemies just outside her Punching radius. Cleavage joke!

Ethan Rivers
Ethan has a very balanced playstyle, serving as a middle ground between the Strength of Connor and the Speed of Megan. Ethan’s attacks similarly have Medium range. Ethan’s being an All ‘Rounder makes him a good choice for beginners, and he’s voiced by the Internet Celebrity Takahata 101!

Jackson
Jackson seems to come out of nowhere, and is unlocked after completing the Arcade mode.
I’m not really sure what connection he has with the main trio of playable characters, but it’s nice to have a fourth playable character all the same.

His Baseball Bat comes out to play if you use his Forward Special attack or perform a Punch Combo Finisher. Bringing out his Gun actually pistol whips enemies in front of him, which is just a nice little touch. His running Kick can hit enemies twice.

As you go through the Stages, which consist of three Levels each, you’ll see background objects that can be broken. By inflicting damage on them, one of several items will fly out!
It could be Food for recovering Health, it could be Cash for increasing your Score, it could be Ammo for your Gun, or it could be a Weapon for you to use like a Crowbar or Sword!

Simply stand over an item and press Punch to pick it up.

To throw a picked up Weapon, press Kick. You can Attack with the Weapon by pressing Punch!

As touched upon earlier, there are 7 Stages with 3 Levels in each. Two of these are actually Vehicle Based levels that completely change up the gameplay. The Difficulty setting determines if you will be able to select your Stage and Level to continue from or not, with Hard requiring a player to get through without a Game Over. (I plan to beat it on Hard next.)

I don’t know if this was intentional, but I discovered during my repeat playthrough on Normal as Jackson that I could Exit to the Main Menu from within a Level and then immediately have access to the next Level via the Stage Select screen. This could even be used all the way to the Final Boss fight! It makes unlocking the Relay Mode much easier, though Relay on Hard is what I consider the best way to play The Takeover.

Steel Haven was a tough town on the best of days. But in the days just before our story begins, things have gone downhill fast. At the peak of this chaotic crescendo, the adopted daughter of two police officers is kidnapped, seemingly by whomever has organized this crime wave described by many as “The Takeover” from which the game derives its Title.

So Ethan and his girlfriend Megan head off to rescue their child along with their enormous commando friend Connor.

It’s very light on Story. Which works since it’s essentially a modern take on a classic arcade game.

There are two game modes set aside for players looking to just blow off some steam, with Survival available from the start and Challenge only unlocking after having cleared the Arcade mode at least once

Challenge is the more in depth, asking players to complete each stage while avoiding using any specials, grabbing all the dropped items (in this case Stars) from enemies, and keeping their Health above 50%. Each of these conditions is tracked individually, and completing 2 or more of them unlocks the next level of Challenge Mode.

Survival is the simpler of the two, but I prefer it. It’s your garden variety Survival mode wherein enemies come out of the woodwork towards you until you lose and you try to defeat as many as you can until then. It just feels more rewarding due to the simplicity.

These are not big deals, but I did notice some things I would change.

The Relay Mode is too good to stash away behind two playthroughs to unlock.
Folk with trouble processing visually chaotic sequences may have trouble in the Rainy portions.
I really want a Relay mode that gives each character 1 Life and a Game Over once all 4 are defeated, much like we see in Bloodstained: Curse of the Moon.

The Takeover isn’t revolutionary, and comparisons to Streets of Rage 4 are inevitable. But the experience here was very enjoyable to me, and it manages to evoke nostalgic emotions while measuring up to modern expectations. I can’t ask much more from a game designed to capture the wonder of the past while building upon that foundation. The music is great, the mechanics are solid, and The Takeover is well worth your 20 bucks if you like what you see and hear from looking at it.