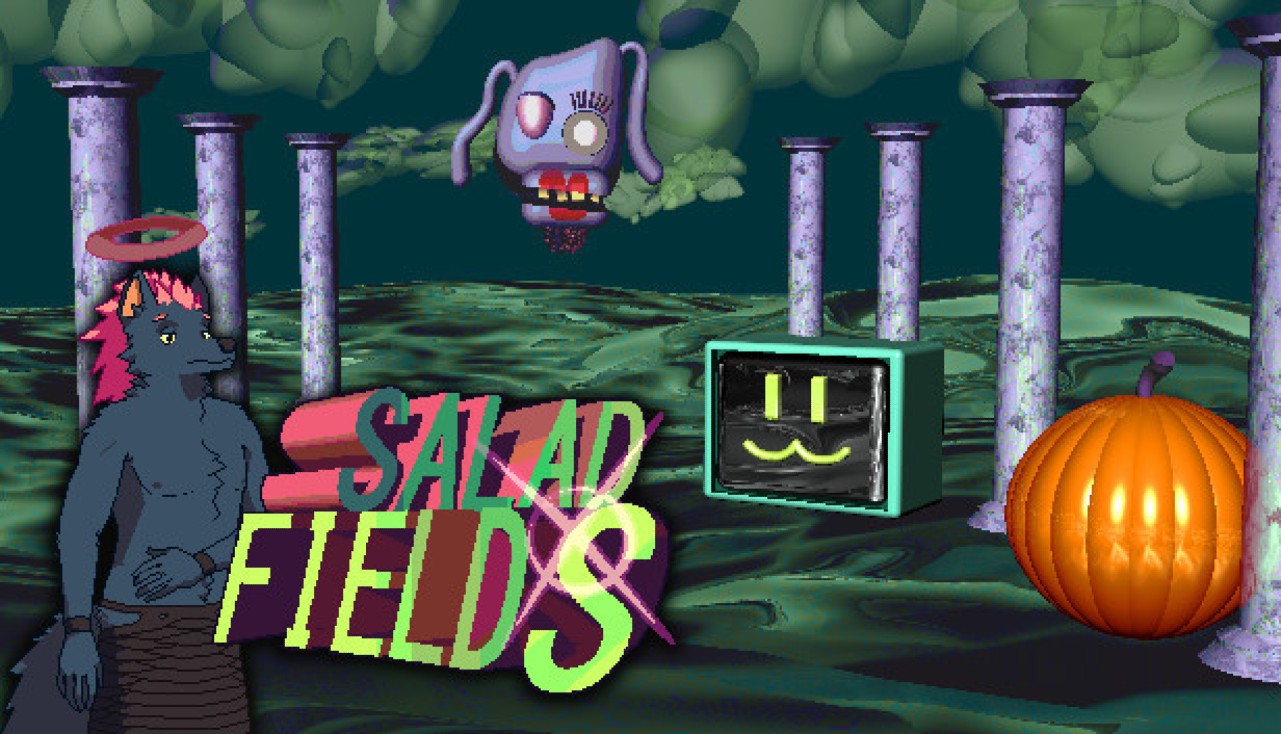 There are a lot of interesting creators in the video game industry. There are mainstream Triple-A developer with huge budgets and heavy duty marketing, smaller independent developers who tour convention scenes and spread positive criticism mainly through word of mouth, and then there’s the classic tale of the lone bedroom programmer. This leads me to our subject for today, the highly unique works of one particular developer, his partner, and the weird and dreamy game they made together, Salad Fields.

Salad Fields is a self-proclaimed “dreamyqueer” puzzle game where you have to solve challenges by pushing blocks around, peppered with interesting mechanical gimmicks and loads of bizarre charm. This game comes to us as a joint effort from developers Resni and Jars, a couple development team, the former of which gave the world games like the highly underrated arthouse platformer Mibibli’s Quest and sexually explorative titles like Peen Peen. I know less about Jars as a developer, though I believe they’ve helped Resni with music in the past, and now they’re fully on board with the creation of Salad Fields.

Ever since Resni’s last game with Mibibli’s Quest I’ve been doing my best to keep my eye on him as a creator, because there’s really not much else I’ve seen before quite like his work. It’s often unapologetically queer and sexual, irreverent and comedic, and always well-designed and uniquely executed on a technical level. Your always in the market for weird and charming gameplay and writing when it comes to this person’s work, and with Salad Fields I’d say we have another success on our hands.

Salad Fields is a block-pushing tile-based puzzle game, and really that’s about as simple as it can be summed up. There is a framework of sorts that gives you a reason to do the puzzles. But for the most part the game doesn’t bother with an extensive explanation of the setting and circumstances, and honestly, you shouldn’t worry too much about it. You’re here for some solid mechanics and a unique personality, and boy does this game have it in spades.

Starting with the graphics. The game has a mixed media artstyle consisting of a pixel art at different scales. And intentionally dated looking 3D renders of character an objects like one might have seen in the 1990’s on old computer screensavers or bowling alley animations. I personally love the look of this game. I found the style and tone to be a fairly even mix of ironic and genuinely charming. This mostly stands out when interacting with characters and collecting one of the game’s many veggie pickups. And let me tell you, seeing a lumpy and nobly piece of broccoli rendered at 5 frames a second accompanied by the phrase “vegmazing” really put a smile on my face. The pixelated landscapes are also very varied in style and color palette, with every item and location looking visually distinct and nicely detailed.

The music is also fantastic. It ranges in tone from intense and rocking to eerie and emotional. Always complementing the level each track is made for quite well, and helping to create an almost other-worldly atmosphere in conjunction with the off-color dialogue.

I’ve saved the gameplay for last in this recommendation because I have the least to say about it over everything else that this game has to offer. It’s very solid and fun gameplay. Just that on the surface it’s very simple. It’s more complex elements are both difficult to describe, as well as surprises I’d rather not spoil for you. You push blocks to solve puzzles, which often involves pressing switches, avoiding insta-kill hazards, and utilizing limited-use magical power-ups. There’s a lot of balls up in the air a lot of the time. And it can be difficult to juggle all the mechanics without getting confused and flustered. But over time you’ll come to understand and appreciate how each new mechanic operates.

Salad Fields also has a surprising number of quality if life design choices for a game so difficult. Firstly, while the level design connecting the puzzles in each level can be somewhat repetitive and have twisted, overlapping layouts. This is easily handled by the addition of a competent map on the pause screen. Additionally, early on you gain the ability to conveniently warp between the actual puzzles themselves within each level.

Salad Fields can be quite hard when It wants to be, which is what I should have expected after the classic Mega Man style adventure that was Mibibli’s Quest. But it’s a more cerebral type of challenge. Resni and Jars have managed to get some seriously intense challenges and mechanics out of a formula as tried and tested as pushing blocks around.

Am I saying that the ability to skip through the gameplay is a genuine positive? Yes. Am I saying that the gameplay is bad and that I want to skip it? No. I’m saying that the puzzles are quite hard, and occasionally when I’m stuck on a particularly difficult one and all I want to do is see what cool or weird thing happens next for the fun of it. It’s a nice feature to have. The game also very kindly keeps tracks of what puzzles on each level you have completed and which ones you have skipped. All the while you can come back and solve them for real if you eventually feel up to it. I just really appreciate that Resni felt obliged to cater to two completely different audiences and actually put in the effort to make your experience easily changeable at any time.

Whatever it’s minor flaws may have done to hamper my experience. I came away from Salad Fields confused and happy. It’s base gameplay may be a very old formula. But it spices it up greatly through seriously challenging puzzle design as well as very unique and well-realized gimmicks. A lot like what he managed to pull off with Mibibli’s Quest years prior.

It’s an inexpensive game that hides a weirdly unique and richer experience than you might be expecting. It’s mood-swing writing and dreamy atmosphere paired with excellent music, unique and elegiac style, and surpsingly deep and difficult gameplay makes for a great game that I highly suggest you check out if your either looking for a real challenge or just want something weird and unique. I’ll have to keep my eyes on Resni and Jars in the future to see if anything else cool shakes loose. Please give Salad Fields a try! It might just expand your horizons, and even if it doesn’t, it’s still quite fun.