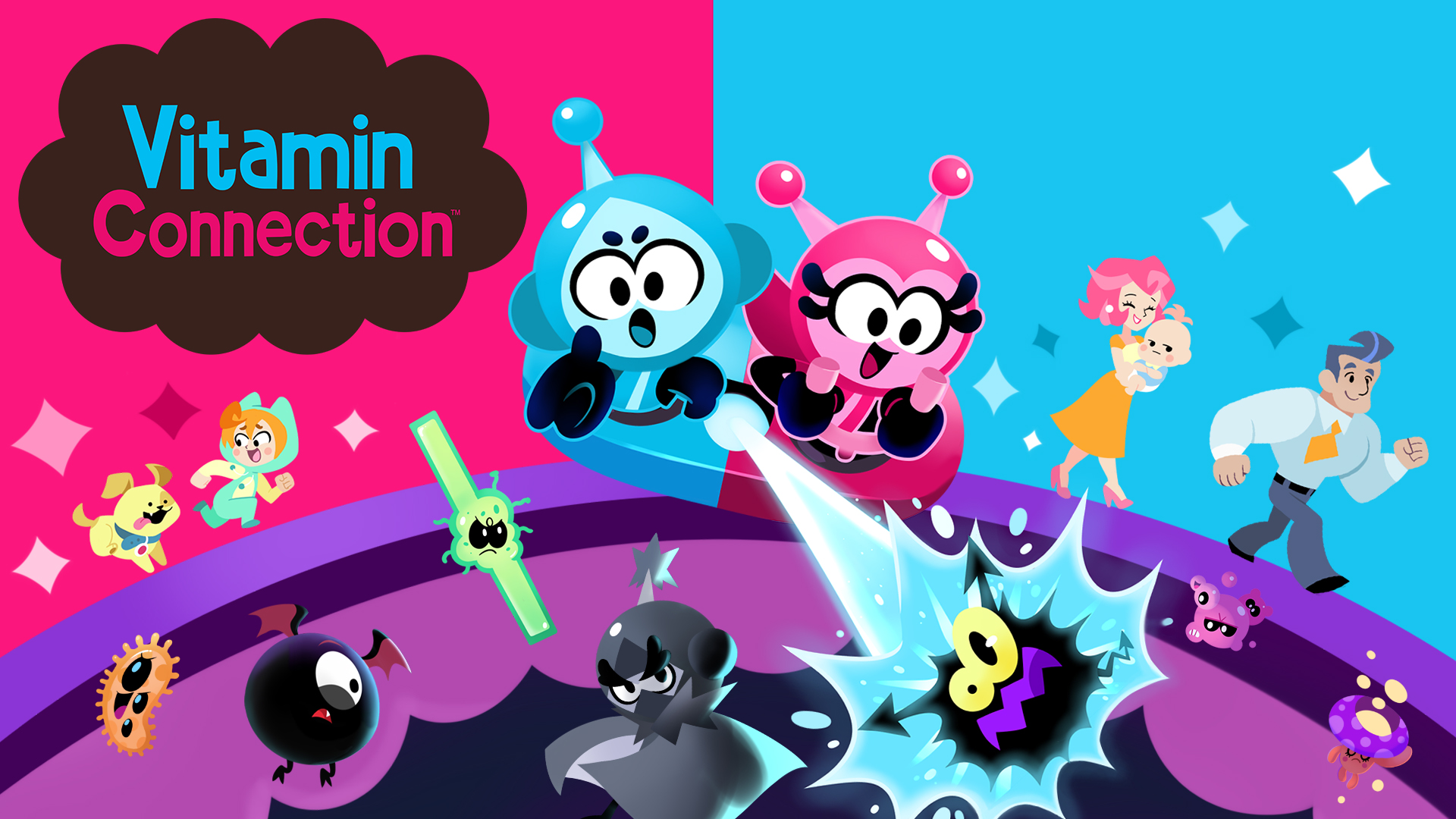 As a small-time writer in the gaming journalism circle. I don’t have a tremendous amount of power. I have some power, granted to me mostly by the people kind enough to give me a platform. But I can only reach so many people this way, and only so many people will listen. But if I had my way, and I could get people to do whatever I wanted them to. I would have everyone reading this go and buy Vitamin Connection on Nintendo Switch right now.

Vitamin Connection is a game that deserves to succeed. It has the kind of unique gameplay that I wish I could see more of more often. It’s original in so many ways. It utilizes the unique hardware of the console. It’s exclusive to so well that it fits in right alongside the major releases made for the system.

Vitamin Connection has you controlling Vita-Boy and Mina-Girl. Two tiny friendly folks who pilot a vitamin-capsule shaped spacecraft. They fly through the bodies of sick individuals in order to blast bad guys, heal their vital areas, and make them feel all better.

Vitamin Connection comes exclusively to Nintendo Switch courtesy of WayForward. The superstar independent developer who has given us the Shantae series, Cat Girl Without Salad: Amuse-Bouche, and many fantastic licensed titles such as their Adventure Time games and DuckTales: Remastered. More specifically, the game was brought to use by director James Montagna. A longtime member of the company who previously worked on many projects including the previously mentioned Shantae and Adventure Time games, and who makes his directorial debut within the company with this game.

Having been one of the few people I know to have played his previous game. The retro-simplistic but still fun and creative Dodge Club Pocket for the 3DS. I can see his style oozing from every crack of Vitamin Connection, and style is exactly the word to use.

James Montagna has stated that influence for the game was taken directly from the original Jet Set Radio as well as Katamari Damacy. Particularly in how both games have exuberant, upbeat tones emphasized by their highly joyful and elaborate soundtracks, and it shows. It’s the kind of game that you might have found in a video store in the early-to-mid 2000s. When Japanese imports were flooding North America on systems like the Dreamcast and PS2. Where unsuspecting American youth would be drawn in by their rainbow color-pallettes and enticing J-Pop soundtracks. This is the type of energy and tone you can expect from Vitamin Connection. Bright, simple colors creating a stark but striking visual style, personality practically dripping from its pores, and simple but fun and addictive gameplay.

The gameplay of Vitamin Connection is a brilliant mechanical twist on the classic premise of flying around and shooting things. The gameplay has both Vita-Boy and Mina-Girl controlling their ship at the same time. Regardless of whether you are playing in single-player or co-op, and will have a lot of mechanics to balance.

You will be both moving the ship as well as rotating it in clockwise or counterclockwise motions in order to dodge obstacles and fit through gaps. All while watching your ammo while blasting baddies with your vitamin beam. A single player will use both standard and motion controls to pull off these maneuvers while playing in co-op splits the duties between two people. Both of these modes are absurd amounts of fun. There is a bit of a learning curve to the general gameplay, what with all the unique controls to consider. But it’s nothing too major considering the game’s generous checkpoint system and steady difficulty curve.

Shooting baddies is all well and good. But there’s so much more to Vitamin Connection than that. Vitamin Connection is a Nintendo Switch exclusive by design. It utilizes every single exotic function of the Nintendo Switch Joy-Cons in a variety of ways. I’ve not really seen for the system since 1-2-Switch (only much, much better). You’ll be rotating the controller to spin the ship, squeezing it in order to simulate a love-tester machine, using the infrared camera to reach out and grab objects. Basically everything and more you thought the Joy-Con was capable of.

I alluded to it before, but Vitamin Connection has a truly excellent, diverse and bountiful soundtrack that is equally as good as the games it draws inspiration from.

The soundtrack is mostly composed of J-Pop songs with catchy upbeat rhythms and lyrics. But there’s also rap music from the perspective of a dog, emo grunge from the perspective of a baby, yodeling and orchestral music and so much more. There are multiple songs on each level, and during gameplay, the game will play these all of shuffle in the background as you play. Adding a layer of refreshing variety to the experience that – on top of the normal gameplay – ensures that boredom is impossible. Speaking of layers, there’s even an additional unique layer of instruments that play over any song whenever you’re firing the vitamin beam, which is a really nice touch.

Speaking on the package as a whole, I do have some minor nitpicks. Some may find the story campaign is a little short for $20, and the main levels can be a bit long with a bit of backtracking through them thrown in. But the constant variety of gameplay – as well as optional means of speeding things up if you should be so inclined – made it not feel like too much of a problem for me personally. Plus, you unlock mini-games to play as you go along, and even a sort of New Game+ sort of scenario once the main quest is over, and you can play through the game either alone or in co-op from the start, so there’s actually a fair bit of replay value here.

On top of that, if you’re looking for something lighter in tone or something to play with your children, this game is right up your alley. I can’t remember the last time that I played a game this good-natured. The music is all upbeat, the game is loaded with bright colors and wonderful shapes, and the dialogue and writing, in general, is both funny and wholesome. This game just wants to spread good vibes and teach kindness, and honestly, I can appreciate that a lot at the moment.

In a time where nearly all of us are stuck inside and worried about the future. We just need something fun to distract ourselves, maybe with a friend if we’re lucky. Here comes a fun, friendly, good-natured game like Vitamin Connection to make us smile, tell us to be kind to one another, and remind us to take our vitamins.

Vitamin Connection is a special kind of game that comes by only a handful of times every generation. One that truly captures the purity of gaming and puts a wild spin on it with the effective use of what so many other developers typically ignore about the console it was made for. I’d go so far as to call it one of the best games available on Nintendo Switch right now, and a classic for the system in the making.

As I write this review, it has been around two months since the game launched, and barely anybody has been talking about it. Sure there’s been some major release lately to be excited about. But it was a bit of a slow spot for the Switch when it released. I’m just a baffled how a game both this unique and this good has been getting ignored by so many people. This has happened with other games before, even with many other WayForward games. But I refuse to let it happen this time.

Vitamin Connection is a must-own game for Nintendo Switch owners given its high quality and meager $20 price tag. So you should absolutely buy it if you’re interested. But if you do buy it, and if you do like it, then do WayForward and people like me a favor and recommend it to a friend. Show it to them, maybe even play it with them, and maybe together we can form a greater connection. Open up the eShop and say “ahhh”, because it’s time to take your vitamins.