A couple of my friends and me have this tradition, where we go far away from home to have some fun. Usually, this is based around game development – you could say that we go out for a boys weekend, but instead of fishing or hiking, we develop some games, its our own little private game jam, and it is a bunch of fun – we call our group Realitylag, and you can see some of the stuff that we created on our homepage realitylag.com

Two weekends ago, we had such a weekend. One of the guys is running the twitter account for “Humpydog” , we have all had a lot of fun with this, and have been laughing really hard at times. So we decided to take this one step further, and create a game called “Humpydog”.

Since we only had one weekend to complete the game, we decided to buy some of the assets we needed for the game, and if the game gets some traction, we will create our own assets.

For our dog we used a Beagle created by Nitacawo – a really nice model to work with, and the rig was easy to adjust so that we could create our “humping animations”

For the landscape and the bear that is what the dog is supposed to hump, we used the “Low poly Ultimate pack” created by Pavel Novák who really created some nice assets that works when you want to create something really fast.

The premise of the game is rather simple. 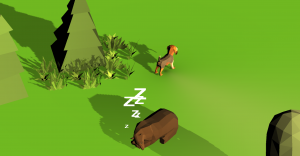 For now, the bear is the only animal that can be humped, but if there is enough interest for it, we will add other animals.