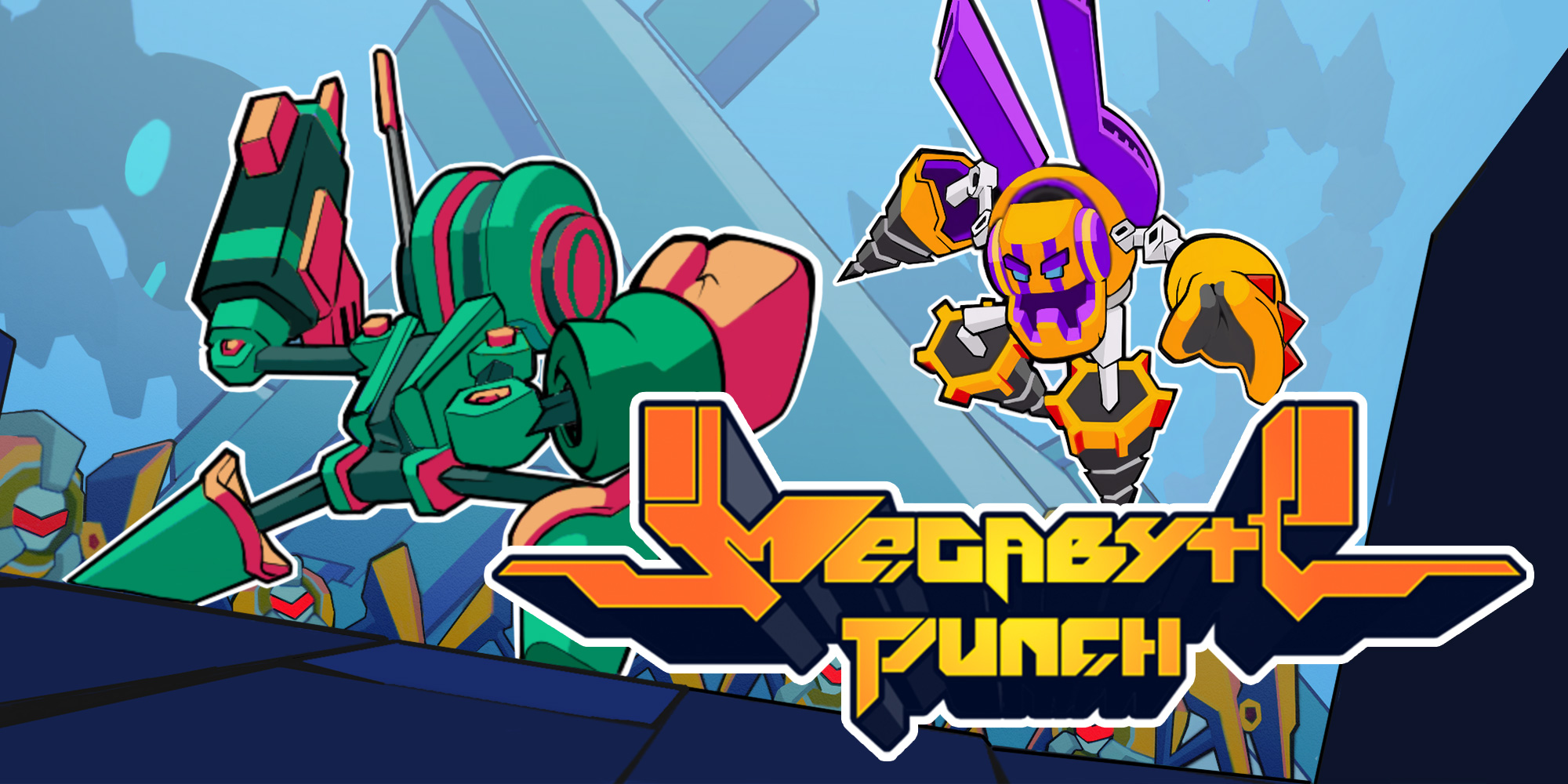 Megabyte Punch feels like one of those games I’d dream of growing up.

A Megaman Style Platformer with Customizable Characters, mechanics borrowed from Super Smash Bros and up to 4 Players? I couldn’t write my Key Request email fast enough!

There actually is some Lore to this game! An Empire causing havoc for a small village of robots.

As the newest and most powerful Megac in the small village of Ventu. You are tasked with protecting it, the HeartCore that powers it, and of course its inhabitants.

The visual presentation gives impressions somewhere between Megaman Classic and the Net levels of Megaman.exe, and the Customizable Megac designs themselves actually bring me back to Custom Robo back on the Gamecube. Game Structure resembles an Explorative Platformer (MetroidVania) with new paths unlocking over time across a larger world.

You’re the strongest Megac, so naturally everything falls into your lap.

For those unfamiliar with the games I describe this as similar to, Megabyte Punch is very colorful and uses plenty of “Tron Lines” which is to say those odd bits of lit up lines meant to evoke the image of electrical circuitry in most media. Simple shapes are everywhere, making this look somewhat “Retro” by emulating design limitations of yesteryear despite being more than capable of detailed models. The end result is a solid frame rate that I can’t recall stuttering at any point.

Ah, the music ain’t bad either if you enjoy Techno! Though sometimes it can get a little repetitive when you’re stuck in a level for far too long.

Each Part of a Robot can affect Stats or add either a Passive Ability or an Active Ability that may be Hotkeyed to one of four Special Ability slots:

These abilities can be mapped to any unoccupied slot of the Four Cardinal Directions, with Analog Stick Input determining which of the four is executed when the player presses the Special Button.

Parts that change your Stats are not to be underestimated. For instance, some Parts boost Movement Speed and Jump Height by 10%. That 10% is readily apparent in gameplay, and equipping two Speed boosting legs just feels so right.

With the Parts system, I have a few nitpicks with how some Parts are identical in all but Name and Appearance, though there are many more unique Parts than generic and it’s not a big problem. It just makes me long all the more for a sequel.

As to the player character’s movelist, my only nitpick after some extended play is how the Low Kick has just a bit less range than you would expect.

There are 30 Color Capsules hidden throughout the game. Whenever you collect one, it will be equippable at your Home. These are purely cosmetic as you would probably expect.

Bits are the Currency of Megacs, and collecting 64 will give you an extra life. They can be spent at a Shop in Ventu village. But in most of my gameplay, I was collecting them to keep alive in the levels rather than to spend afterward. Whenever you have more Parts than you want or need, you may convert them to Bits. Parts that have an Ability attached will give you 4 Bits, while all others will give you 2 Bits. This can come in handy since it converts something potentially worthless into something inherently useful to you.

Your Shield is activated with the Right Shoulder button, and creates a digital Purple Shell around your Megac. This can be broken both by holding it too long or by a player smashing it with a Shieldbreaker move.

Where do they come from?

Parts are bits of megacs of course! Whenever you defeat an enemy, there is a chance they will drop a Part of themselves for you to pick up. Every time you finish a Stage (A vast Playable Area, 1 of 3 per Level) your currently equipped Parts will be Saved and selectable at your Home from then on. However, all your currently carried Unequipped Parts will be lost upon exiting a Stage.

All Unequipped Parts can be broken down at the in Parts Menu opened with Y. Parts offering an Equippable Ability will break down into 4 Bits, while all other Parts will break down into 2 Bits. You won’t get rich this way, but all extra Parts are flat out lost after exiting a Stage, so it pays to do this before advancing.

You’ve got slots for 7 parts in total, with two of each for Arms and Legs respectively.

Every Part in the game can only fit in its matching slot. Some Parts have Special Abilities which are Special Moves you must manually Equip, and they have effects that alter your Megac’s Stats, and Passive Abilities that boost your performance. But only one of these 3 categories or nothing at all.

Personally I like to have a part that gives an Ability functioning as a 3rd jump for either climbing back up after a hard hit or for reaching high places and finding secrets. Apart from this one critical part of my Builds, my only other requirement is an Ability that works as a good finisher.

The remaining Slots can be filled with anything. But usually I end up using Stat Boosting Parts.

Enemies can Shield, and that kinda sucks for you when you’re attacking.
But you know what would suck for them? If their shield broke; And you can make it happen!

Your hips are a mighty weapon in this game, and pressing the Left Shoulder button or Left Trigger unleashes what I call the DD “Deep Dick” which can immediately break shields!

*Team Reptile probably prefers we call it the “Shieldbreaker” or “Pelvic Thrust” attack.

Apart from breaking Shields, this move is only good for proving complete dominance over your opponent. No other Standard Attack has such pitiful Range or Damage output or Startup Lag.

Naturally, I use the Deep Dick entirely too often and it surely has cost me many victories…

But nothing feels so good as finishing off your friend by slapping them silly with your titanium salami.

This game is rather PostModern with its presentation. You will move through areas blatantly labeled as Level 1 and Level 2 and so on. Each Level has 3 Stages followed by a Boss Fight.

It bears mention that many pieces of your environment in Levels are destructible. Early on you’ll figure out how to kick enemies through dirt and walls, and honestly that never gets old. There is something special about seeing a path torn through solid matter where you just kicked some Mantibyte critter.

I’d be shocked if a game like this didn’t feature boss battles. That said, they will destroy you utterly if you aren’t paying attention. Usually defeating a boss will result in acquiring a new Part, often one that will help you reach the next Level such as the Drill Arm.

Something that will delight households with Siblings, Megabyte Punch features up to 4 Player Splitscreen Co-Op and Versus!

There isn’t as much to say about the Splitscreen Co-Op as I expected to have, as it works exactly as one would expect. It’s the same game but with your screen halved or quartered. Definitely not ideal for play on the go, and it could be a problem for you if you suffer from relatively poor eyesight like myself.

With that bit out of the way… Versus. I really enjoyed playing this game with my bubba Brandon. Both players are dumped into a lobby at first with the same facilities as you find in the Main Game “Home”, with three machines for dispensing parts, saving builds, and swapping colors respectively. You must use the Lobby to prepare a build you like using the Parts and Colors and Builds you have acquired on your Profile. Sooo this mode gets a lot better as you get farther in the game. With the exception of very odd placement of the Jump Button (X on the Switch) you will find the controls very similar to Smash Bros. In fact, my brother forgot it wasn’t Smash bros during one of our bouts. Sooo I consider that a positive testimony as to the feel of Megabyte Punch’s gameplay.

When playing this, I felt that same strange magic of playing a game I never heard of randomly selected off the shelf of some Rental store. It’s a hidden gem. The gameplay to this is unique, and I’d love to see a sequel explore its design space further since nothing else offers anything quite like it.

Do ya like Megaman? Do ya like Smash? If so in either case, you’ll find something special here.

Team Lizard knows how to make a great Action game, and have delivered a unique and high impact title in the form of Megabyte Punch. Bring your friends!