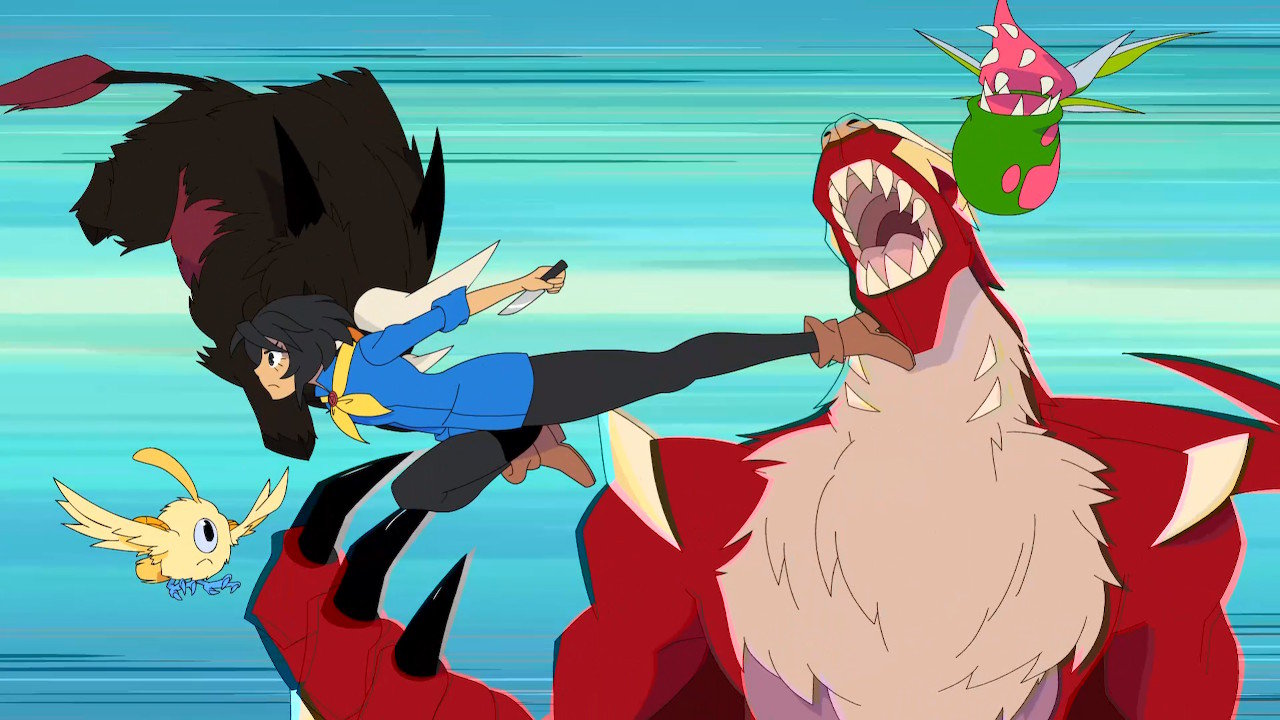 Battle Chef Brigade Deluxe is a highly unique cooking game. It was originally released for Nintendo Switch and PC in 2017 as just Battle Chef Brigade. Before eventually being expanded on into its current version with several new modes and the added title of Deluxe. It remains to this day one of the most unique indie games that I’ve ever played. It’s unfortunate that more people haven’t heard about it. I suppose that’s the benefit of writing for a site like Polyspice. I get a chance to recommend a neat little side dish like this.

Battle Chef Brigade Deluxe is – in the simplest of terms – a combination of a side-scrolling beat-em-up, platforming, cooking, and match-three gameplay elements. It might sound intimidating or like too much to handle. But I can assure you that it plays like a dream. Once you get used to the controls, you’ll be eagerly slicing and dicing your way through fantastical beast galore in order to assemble gorgeous looking gourmet meals.

You play as Mina, a small-town cook working at her family restaurant who runs away from it all to accept an attempt to join the Battle Chef Brigade.  Most of the plat after that is twists and turns that I’d rather not spoil here. But it’s a largely light affair. The story smartly never compromises the gameplay and keeps it safe with cooking challenge after cooking challenge. Making sure to take the time to characterize your opponents in the time between the matches. While also allowing the difficulty to gently curve upwards at a reasonable pace.

In the average battle, you have several judges who want certain flavors emphasized in the dish you serve to them. And each ingredient that you collect from different enemies has different levels of three different types of flavor. All with their own set color. You mix the ingredients into the meal as necessary in order to match the general flavor profile the judge wants. And the rest of the details are up to you.

The dev team really wanted to make a cooking game that encouraged creativity, rather than forced you to strictly follow recipes as many other games do. Battle Chef Brigade shines once you realize that you can basically just do what you want. And as long as you do it well, you’ll succeed. Even if you fail a cooking challenge, most of them are only a few minutes long. As so retrying steals little time from you. And every failure teaches you a little more about how to play the game more optimally.

There are multiple elements and items added to the gameplay the course of the story that builds on the established mechanics quite well and added at a reasonable pace so that the gameplay doesn’t get too repetitive. Things like fragile ingredients and removing bones from meat, all-natural things for a chef to consider that makes the experience that little bit more skill-testing and immersive.

What also helps the gameplay expand from it’s already solid core concept is the simple but strong customization system. Different types of cookware, spices, and stat-changing gear can be equipped between matches in order to sway the odds in your favor or alter the playstyle more to your liking. It’s a system that provides depth to whatever you decide you want your playstyle to be without being too alienating with it’s depth.

Then of course there’s the aesthetic of the game. Battle Chef Brigade Deluxe was inspired by the works of developer Vanillaware, such as Odin Sphere and Muramasa: The Demon Blade. This all shows in both the fantastical setting and beat-em-up elements, as well as the graphics. The visuals are all hand-drawn with an anime-inspired look loaded with both bright and soft colors and loads of memorable and diverse character designs. The animation itself might be rather minimal, but it’s mostly forgivable due to how expressive the art is by itself, held up additionally by the fantastic voice acting and solid soundtrack.

For $20 on all platforms Battle Chef Brigade Deluxe also offers a solid amount of content. On top of the roughly 12 hour long story mode, there’s also a local multiplayer mode, daily challenges with online leaderboards, free play mode, a mode similar to “Break the Targets” from the Super Smash Bros. series. It’s a great big buffet of a game with a one time fee, which is the best type of game and buffet.

There is not much that Battle Chef Brigade Deluxe does that I can criticize. The story could have been a bit more fleshed out in certain places, and some additional animations and characters to play as would be nice. But aside from that there is a lot here to love. It is a serious value for money, addictively fun, and still now wholly unique among both puzzle and cooking games.

Playing a game like Battle Chef Brigade is like taking a break from your favorite restaurants that you normally order from to try out a weird new food-truck. Perhaps it isn’t as familiar to you as your other typical meals. But sometimes it’s good to try new things and experiment because you might find something new to love. Battle Chef Brigade Deluxe is available now for PC, PS4, and Nintendo Switch.