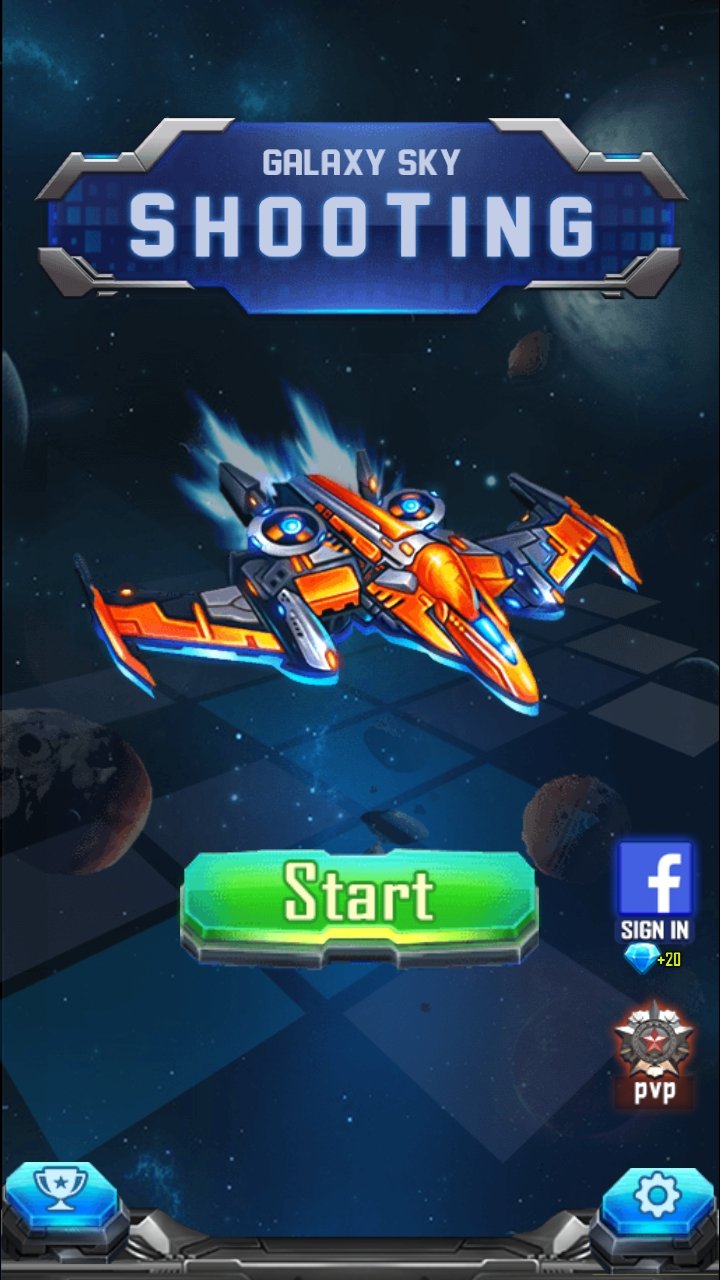 If you’re like me and have been playing video games for the better part of the past 25 years, mobile games are a hard sell. Which is why a game like Galaxy-Sky Shooting is so good.  Published by Ivy, his game is a top-down space shooter, pure and simple with very generous hit detection and multiple modes of play, including an endless mode, a boss fight mode, and a campaign with 210 (as of writing this) levels.

Galaxy Sky Shooting is a modern game.  All the sprites are modern, all the text is large and easy to read, and everything looks like it was made today.

Galaxy Sky Shooting most definitely has a modern sound design.  The music is very much a modern electronic soundtrack, all the explosions sound modern, and all the bullets sound like they were made today. Even the voice samples have a clear sound to them.

Galaxy Sky Shooting is in a genre that requires precision to dodge fire and hit enemies, but thankfully, it is very generous with hitboxes. No matter how wide the ship is, only the middle section where the cockpit would be is the hitbox for you.  So, as long as you keep that section out of the fire, you’re good. And since the weapons autofire, all you need to do is concentrate on dodging and lining up your shots.

The only downside of Galaxy-Sky Shooting that I can say is the ad policy and microtransactions.  Ads are frequent; they happen between levels, and sometimes between switching menus.  However, once you’ve viewed enough of these mandatory ads, you are given the options to tell the game that no, you don’t want to view ads, and they either let you pay to remove them permanently with a one-time fee, or view one more ad to remove them for the day. That does not count toward the ads that let you double your rewards, though. Those are still available.

Microtransactions, however, are extremely prevalent.  You can buy all the different currencies, as well as new starships, more rolls on the upgrade wheel, and so much more.  Thankfully, there’s only one ship that you’re locked out of permanently if you don’t buy their VIP upgrade.

Galaxy-Sky Shooting is in a genre that is mindless fun, and when you combine good control and reasonable hitboxes, a game like Galaxy Sky Shooting can be a blast. It’s great for a short round or two while on the bus or train, and it’s also good for “Oh, one more round” gameplay when you’re on your own. While not perfect thanks to the overbearing ad policy, space shooters are a perfect fit for mobile devices because they make full use of what mobile devices have to offer.  If you want to toss a couple of bucks their way to remove ads permanently, that’s up to you, but otherwise, it’s a great free mobile experience that you don’t want to miss out on.

Check me out on twitter here, my personal blog here, and if you want to support me in my other writing endeavors, check out my patreon.