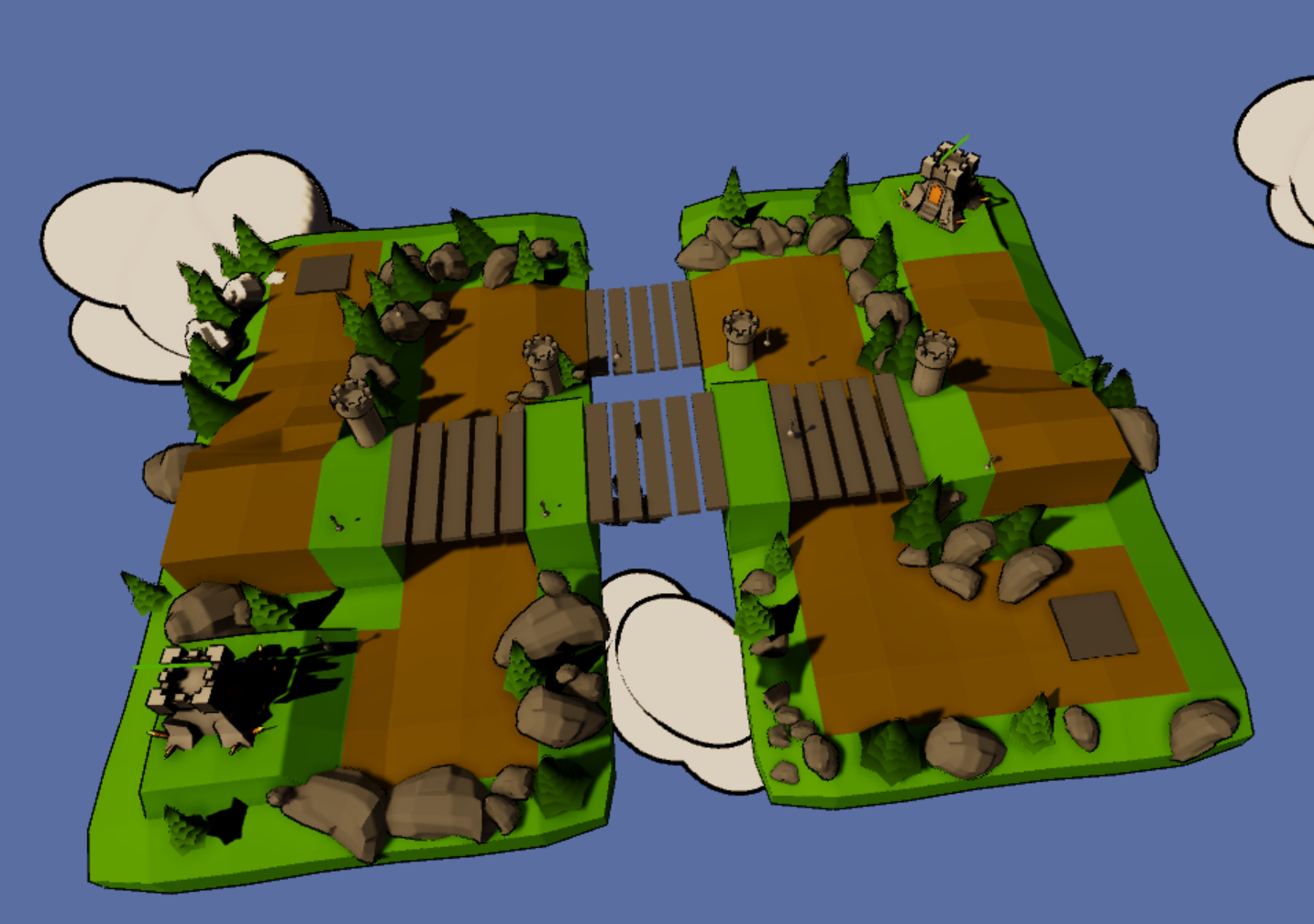 So, I have been sweating over this game of mine called Stupid Soldiers, and I am closing in on wanting to release it for everyone to play. But before I do this, I would like to show and tell a bit about one of the challenges that I have been having getting the leveldesign to work. Both visually and mechanically.

For those of you who did not read my previous post about Stupid Soldiers, here is a quick summary: Building soldiers will generate an income, and use this income to upgrade your towers to defend yourself from your enemy or build an army to destroy your enemy and generate new income. (Read everything here)

However, this mechanic changed a bit since I wrote this, because I found out that it was a bit to complicated to figure out that building soldiers would generate income, so instead I build a “coin maker” that now can be upgraded in order for a higher income. This makes it easier to understand the mechanic by separating the war part from the economic part.

Now then, back to the leveldesign – To start with, I simply create a two side battle, where each side had four wall pieces, that had to be protected, in the middle there was a gate where the soldiers would spawn, and a couple of towers that could be upgraded for defense. 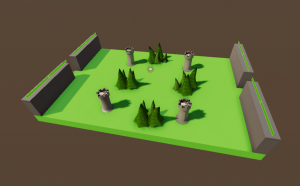 One of the ideas here was that the soldiers would attack each other, as part of the defence, meaning that both sides would walk the same way to get to the enemy. This however, enden up in a rather random mashup, where either side would block each other, and the stupid soldiers would randomly die first, to harm the others, making it to chaotic whos soldiers would win. At the same time the soliders would pick a random piece of wall to try to destroy, however, this meant that there was no control over where the soldiers would go, which is something that I wanted to avoid (the feeling of not being in control. So this level design was scrapped, and I moved on to the next design that was a bit more daring, and moved away from the idea that the units should fight as well. 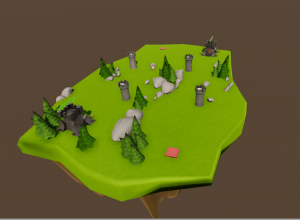 The new level i created was a bit different, there was two sides, that would spawn the units on the same island, but they would spawn on each side of the island,  and instead of four walls, there was a single “end tower” that removed the random direction of your soldiers. Spawning on  each side of the island, simply meant that there would be no fighting. However, as you can see on the image, it became difficult to  see which tower belonged to which player, and I had to do something about that. I started, trying to set up some green and red smoke torches, to indicate which side was which, but somehow it did not work. So in the end, I gave up on the design and tried something completely different. 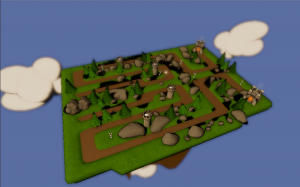 On  the third level, I wanted to make something that was a bit more slow, in terms of the amount of time the stupid solders would walk before getting to the destination. It had felt a bit to fast before, and even though I had now established that the two sides should be clearly seperated, I wanted to create the possibility for a longer route that the creatures should walk.

Unfortunately, Unity’s pathfinding did not like this design, and the Stupid soldiers became to stupid.. and were incapable of finding the way to the goal. It was extremly frustrating, but I also realized, that in order to get this level to work, I would either have to implement some sort of camera control (which I did not want to) or I would have to zoom out so much that it was not possible to see what was going on. So this model was ditched. 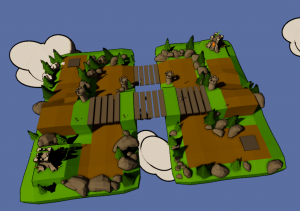 The fourth attempt, I really liked, it was creative and fun, and had that clear path and sense of sides to it.  There was no doubt whose side you needed to protect, and what side you needed to attack, but this level revealed a few other problems. First of, the difficulty understanding that building solders would generate income, and second, the bridges, would cover up some vision of where your units were. And this all together created confusion.

I started thinking about how it could be even more clear what player belonged where. I took the idea of having two islands, removed the bridges, and now I had two seperate islands that could be color coded.

At the same time, i started reflecting over what could be done to make it more clear how income could be generated. 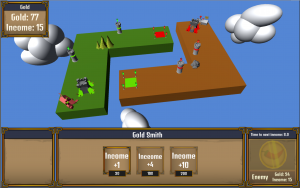 As you can see on this version, I kept the idea of having two seperate islands, where the monsters are completely seperate. And I kept the idea of having the coin creation seperated from the spawning of monsters, thinking that this makes most sense, and that it is the easiest way for the player to undestand the gameplay. However, it turned out, that adding another element, even though in theory it shuold now be more obvious what happens, the extra building to relate to, just made it more difficult. Besides that, seperating the gold creation from the monsters, created a new challenge, where the idea of spawning monsters evenly ower the course of a game, completely dissapeared. There was no longer any motivation to spawn monsters evenly over the course of the game, the only real tactic that works, is to save money, and then spawn an ocean of monsters that will then win the game. So, for this entire adventure of adding the coin creation house, it was back to the drawing board.

So now, in the end, I actually ended up in the situation where I have gone back to the original idea. One lane, two sides, monsters attack each other and thus can be used both as offence and defence, and they are part of generating income. So it all comes down to who plan the best, and who is the best at time what to buy when. There is a power in knowing when to buy and when to upgrade, and for now this is what I will stick to, and I will try to refine this simple mechanic, and see if it is any fun.. if it is, then great. If it is not.. then on to the next project 🙂