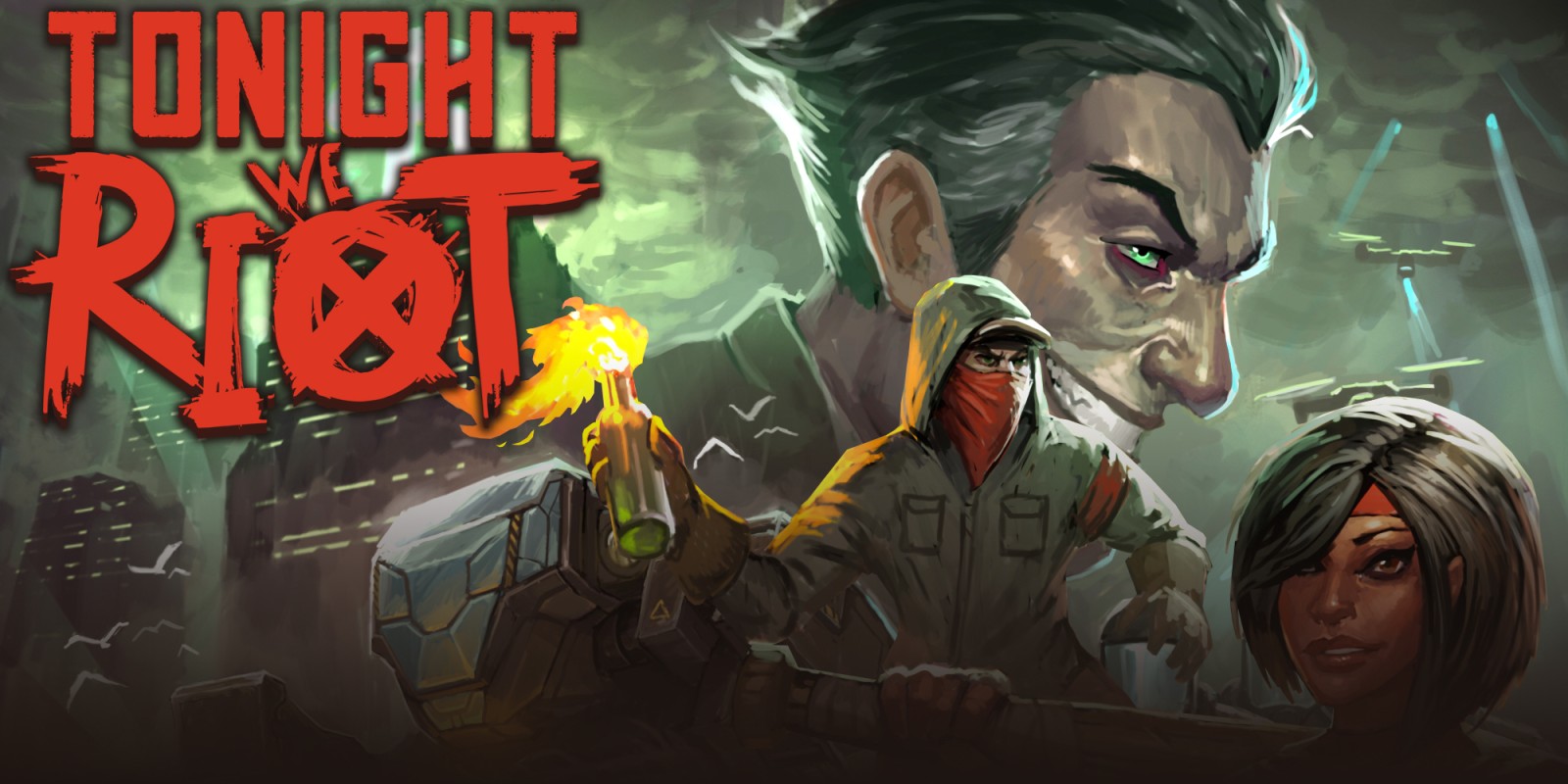 Tonight We Riot is a political game. Normally I feel a discussion of potentially volatile topics such as politics should be separated from gaming discussions online. But that is impossible here. This game is political. It has an agenda, and at the very least it makes no effort of hiding its nature. I applaud the developers for it.

I’m a man without a favored political party. I believe in the idea that American capitalism needs to be reformed rather than replaced. We should close the loopholes and for once force the wealthy to pay their taxes for once. I also believe that capitalism is the most direct way of harnessing Human Nature towards serving both Itself and the common good.

Notice the flaming corpses? This game mercilessly kills your comrades.

That ability to do good means nothing in the face of what we are facing as a people today. I’m watching my home fall apart, with no apparent means of significantly contributing to the welfare of its people. It’s as if I am watching a nightmare unfold, between the Coronavirus, police brutality, and the question of how many times in four years the Orange Menace can bring us to the brink of nuclear war. My personal horror upon playing this game stems primarily from my feelings of helpless observation.

Tonight We Riot could not be played at a more thematically appropriate time. That profound resemblance to reality is precisely why it chills me to my core. Players are tasked with leading those sympathetic among the Populace in a revolt against a tyrannical Capitalist government ruled by the wealthy and corrupt.

This is where you’ll be when selecting a Level to play. I love the Art Style for all the buildings and structures especially.

Something that became immediately apparent to me was that my army of Workers, not Soldiers, do not stand a chance against a proper fighting force, and surely enough, my first attempts were just hopeless. My mortality rate was as high as 80 to 90% even when I did manage to clear a level.

Until you understand how to effectively maneuver and utilize your comrades. You’re going to repeatedly see them cut down one by one. The game is quite challenging until you decipher the tricks to clearing each hostile encounter. Even then it only became somewhat less so.

After much practice, I pushed through and reached an “Area Liberated” “Workers Saved” screen with all but two of my revolutionaries laying dead. This final calculation of my supposedly successful performance as a Victory made me feel sick to my stomach.

“Victory” is not the word I’d use for this catastrophe. It gave me horrible visions of the bloodshed sure to result from a true Revolution in the USA.

I don’t believe we will see a violent revolution in our world. But I am uncertain and terrified of the thought. And the comic relief derived from the headlines of this game’s propaganda laden newspapers would be much more effective for me if they didn’t mirror the absurdity of our present situation so perfectly.

Metaphor through Game Mechanics is a beautiful thing, and Tonight We Riot derives its game design heavily from the thematic concept of Collectivism layered over gameplay styled after the Beat’em up genre. Counter-intuitively for somebody like myself, in which I would rather relegate my allies towards the back for their safety, an individual stands very little chance against the enemy Riot Police and the devastating power of their machinery. To win, you must use your Many against their Few. Crushing Individual threats by capitalizing on your numbers whenever you can.

Partially, this is realized by how the Ammunition system of this game works. One brick thrown by one man does mediocre damage at best. But if you have for instance a party of five standing close together, then throwing one brick will instead throw five for the cost of one. And once you realize this, defeating enemies becomes much less problematic. Keeping your rank and file close at hand will amplify your firepower with projectiles.

The same applies to viable methods of minimizing Casualties. While you’ll be tempted to use that Pipe Wrench and go ape on the enemy alone. That approach is only really viable for single targets or a pair of Infantry at most.

This Dog is well loved by the Revolutionaries, and he seems a lot more capable than your average Comrade. I suspect he speaks Russian.

Thankfully, as the game progresses, Tonight We Riot becomes more ridiculous and silly. Less “Satirical Ghost of America’s Future” and more like a somewhat twisted cartoon. For instance, the second boss battle is a race to outrun an enormous woodchipper using a Monster Truck in the middle of a forest.

The next world introduces an experimental food additive that instantly mutates an exposed human into a giant slug beast. The silly bits that start-up at the end of the first Chapter is what snapped me out of my funk so I could start enjoying Tonight We Riot for what it is, a well-made Video Game with a Mission to mercilessly satirize capitalism. It serves both to entertain and to gently warn the populace of what it looks like when the screws start to come loose. What it looks like when News Agencies print propaganda, and what it looks like when the State is trying to bury something.

While sometimes resembling our world to an uncanny degree, other times Headlines provide their own Comic Relief.

In terms of Gameplay, Tonight We Riot could be considered a much darker take on games like Kirby Mass Attack and Pikmin. Players will learn to move their party or will consistently suffer casualties until they do learn. There are Unlocks behind each Level of the game, doing well enough to get a 3 Gear rating will unlock a Perk or Weapon permanently. These Unlocks are recorded under Riot Gear and can be turned On or Off from there. These Unlocks make clearing levels much easier, usually, and give a great sense of tangible progression as a reward for skilled play.

Even after all that Progression though. You’re still gonna see Whippleton’s shiny teeth and perfect hair on this screen more than you would like.

And in terms of Writing and Presentation… This is a great example of a game best enjoyed by the educated. But one that also serves in some ways to force its audience to think critically of their relationship with the Government. Perhaps for the first time in some cases. As such, I think this game has legitimate claim to a position in the classroom and the general Educational Curriculum. I really do hope video games become commonplace in schools one day. I hope to see this one among them.

Tonight We Riot is available Digitally on most current platforms. Means Interactive sent me a Review Copy on Switch and I am very grateful to them. While I often forget to mention being sent Review Keys. I ask that readers just assume it to be the case unless I say otherwise. I try to write about a lot of different games, and that becomes prohibitively expensive very quickly otherwise.